Babies in South Africa that would once be at high risk of malnutrition, disease and even death, now have brighter futures as nuclear techniques help mothers become more diligent about exclusive breastfeeding for the baby’s first six months.

Breastfed children are more resistant to disease and infection compared to formula-fed children, points out the World Health Organization, which recommends that from birth up to six months of age babies should drink only breast milk. Research indicates that breastfed babies are less likely to develop diabetes, cardiovascular disease and cancer later in life.

“South Africa has very poor exclusive breastfeeding rates and improving breastfeeding practices in order to reverse the dismal infant mortality rates in our country has now become an urgent priority,” said Anna Coutsoudis, Professor in the Department of Paediatrics and Child Health at the University of KwaZulu-Natal in South Africa.

Healthcare practitioners, especially those in developing countries, have been promoting this concept in clinics, health centres and maternity wards in order to prevent malnutrition, disease and eventually death in infants.

Health officials in South Africa thought their efforts were successful, because research — which relied on mothers’ self-reports of breastfeeding frequency — showed a significant increase in numbers. However, the infant mortality rate did not show a commensurate drop.

In 2013, around 1.1 million babies were born in South Africa, and 33 babies out of every 1000 live births ended up dying within a year, according to the country’s official statistics.

Something was not right.

In 2010, researchers in South Africa, with funding and support from the IAEA, started using a nuclear non-radioactive method called the deuterium dilution technique (see box) to get accurate figures about how many babies were being exclusively breastfed, and when complementary foods were being introduced into babies’ diets.

The results were distressing and showed that the mothers’ reports of exclusive breastfeeding were a large overestimation compared to the more accurate information that was obtained by using the deuterium dilution technique, said Coutsoudis.

The programme had a big impact on improving exclusive breastfeeding rates. 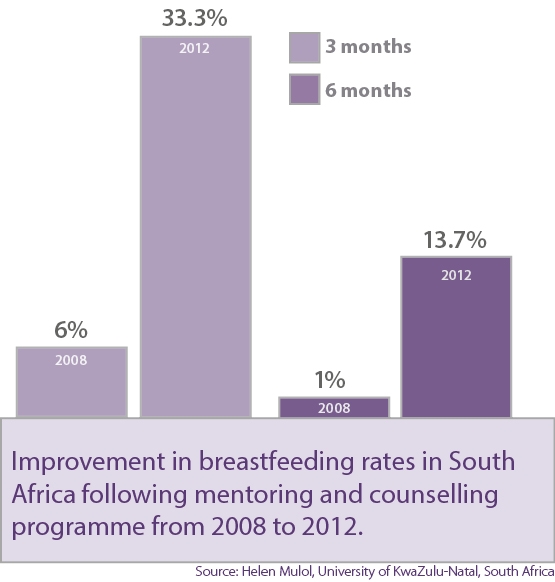 Having IAEA training and support in acquiring equipment to use this technique made it possible for Coutsoudis and her team of health researchers to more accurately assess the impact of programmes designed to improve the poor exclusive breastfeeding rates, which were estimated to be 6 per cent at three months old and only 1 per cent at six months old, according to a 2008 study in KwaZulu-Natal.

The new mentorship and counselling programme has been so effective that Coutsoudis said there are mothers resisting the strong external pressure to introduce complementary foods too early.

Here are the accounts, as told by Coutsoudis, of Ms K and Ms C:

“Ms K said, ‘My friends came to visit me at my house and asked “what porridge are you feeding your baby as she is so fat and looks so good’. I replied: ‘I am not giving porridge, only breast milk.’

“Her friends did not believe her so they looked in her cupboard to see if she had any porridge and there was none. She proceeded to inform them very casually about how all mothers can produce a lot of milk to feed their babies on breast milk only in the first six months by feeding the baby often — every 2 to 3 hours when they are small.”

“Ms C said she went to the clinic for her immunization visit and the sister [nurse/healthcare worker] told her that her baby was too fat and she should stop breastfeeding, she told the sister she was only giving the baby breast milk and you can’t overfeed a breastfed baby so she was not going to feed her baby less.”

The mother drinks water labelled with deuterium, a stable, non-radioactive isotope of hydrogen (D2O). The deuterium mixes with the water in the mother’s body, including her milk, and enters the baby when it suckles. The saliva of the mother and baby then contains deuterium. Over the next two weeks, scientists regularly collect samples of saliva and measure the deuterium content. How much deuterium they find is directly proportionate to how much breast milk the baby has ingested.

The technique also shows if the baby has ingested anything other than human milk over the test period.

“A mathematical model is used to determine how much of the deuterium given to the mother appears in the baby’s saliva. This is related to the amount of human milk consumed by the baby. The mathematical model also gives an estimate of the amount of water from sources other than the mother’s milk, and therefore whether or not the baby is exclusively breastfed,” said Christine Slater, Acting Head of the Nutrition Section at the IAEA.