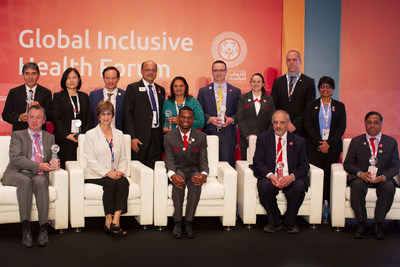 The Golisano Global Health Leadership Award, named for philanthropist and Paychex founder Tom Golisano, was presented to seven recipients at a ceremony today in Abu Dhabi at the 2019 Special Olympics World Games.

The Golisano Global Health Leadership Award was established in 2017 to recognize the progress being made around the world to increase access to essential health care for people with ID. It is Special Olympics’ highest honor for health partners.

“As we honor the 2019 Golisano Global Health Leadership Award honorees we recognize the impressive work health care professionals can achieve to care for a marginalized population,” shared Ann Costello, Executive Director of the Golisano Foundation. “We applaud these individuals and organizations and challenge others to make the same strides for people with ID.”

Special Olympics is a global inclusion movement using sport, health, education and leadership programs every day around the world to end discrimination against and empower people with intellectual disabilities. Founded in 1968, and celebrating its 50th Anniversary this year, the Special Olympics movement has grown to more than 6 million athletes and Unified Sports partners in more than 190 countries. With the support of more than 1 million coaches and volunteers, Special Olympics delivers 32 Olympic-type sports and over 100,000 games and competitions throughout the year. Special Olympics is supported by individuals, foundations and partners, including Bank of America, the Christmas Records Trust, The Coca-Cola Company, ESPN, Essilor Vision Foundation, the Golisano Foundation, the Law Enforcement Torch Run for Special Olympics, Lions Clubs International, Microsoft, Safilo Group, Stavros Niarchos Foundation, TOYOTA, United Airlines, and The Walt Disney Company.

Tom Golisano — entrepreneur, philanthropist, and civic leader — is the founder and chairman of the board of Paychex, Inc., headquartered in Rochester, NY, USA. With more than 12,000 employees and 100 office locations nationwide, Paychex is a leading national provider of payroll, human resource, and benefit outsourcing solutions for more than a half-million small and medium-sized businesses. Tom’s vision, perseverance and action have left an indelible mark on a broad spectrum of issues that touch our lives – in business, healthcare, education, voter policies, politics, and tax reform. A fierce advocate for dignity and inclusion, Tom Golisano applied his pioneering spirit to establish the Golisano Foundation to help make the world a better place for people with intellectual and developmental disabilities.

In addition to Tom’s personal philanthropic contributions to hospitals, educational institutions and other organizations exceeding $300 million, the Golisano Foundation is now one of the largest private foundations in the United States devoted exclusively to supporting programs for people with intellectual and developmental disabilities. Founded in 1985, the Foundation is focused on “Imagining the Possibilities.” With more than $40 million in gross assets, it has awarded more than $24 million in grants, about $2 million annually, to non-profit organizations that serve people with intellectual and developmental disabilities.